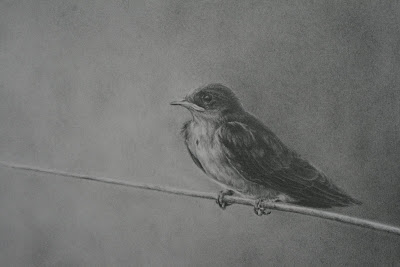 This graphite study of a juvenile barn swallow is a departure from my usual subject matter.  Upon request, it is one of two bird drawings I will complete for an upcoming exhibit in Ohio several months from now.  (If you saw the previous post of it as a work-in-progress, you may be wondering what happened to the brown paper -- but said color was simply the result of a poor photographer!)  The photo references for this were obtained when my son and I came upon this swallow and its two siblings on our horse fence.  They seemed quite unconcerned with us, and so we were able to get little more than arm's length from them with the camera.  This piece may warrant a little tweaking still:  for instance the background tones seem a little dark, so I may perform a little lift-and-blend operation.  As fresh-eyed onlookers, what do you think?  Too dark?

Barn swallows are an engaging and lovely little bird.  Their iridescent blue feathers are striking, and can go unappreciated unless one sees them up close.  The killing of barn swallows for their feathers was just one issue that prompted the passage of the Migratory Bird Treaty Act, thus protecting them as well as many other migratory species.  Each season after their offspring fledge, they congregate in groups on the edges of fields and forests prior to their long migration to Central or South America. 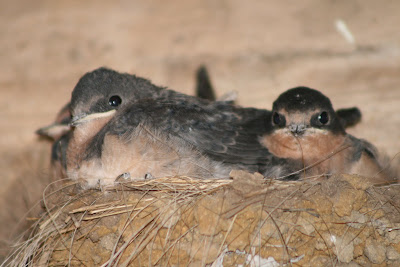 For many years I have watched and been fascinated by barn swallows as an observer at the northern-end of their yearly cycle.  Suddenly on a day every April,  two or three of them will arrive happily at the horse barn and I will know that it is about to occur -- and within several days the air is filled with dozens of swooping, diving, calling, seemingly joyous barn swallows.  Their singlemindedness of purpose is admirable, and they waste no time rebuilding a nest or occupying an already existing one.  Most will produce two broods by early August, and then by early September they are gone just as quickly as they came -- leaving the barn and the surrounding sky quiet and empty until the following spring.

In a way, they mark the passage of time with their abrupt arrival and departure each year -- and for me, more so than the arrival of each new year seems to.

Posted by Lynda Schumacher at 8:50 AM