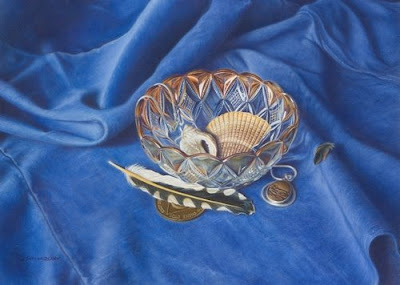 The Jacqueline C. Hudgens Center for the Arts in Duluth, Georgia, will host the 17th Annual International Exhibition of The Colored Pencil Society of America. The approximately 125 colored pencil works that make up the exhibit were chosen by juror Graham C. Boettcher from several hundred submissions. Mr. Boettcher is the William Cary Hulsey Curator of American Art at the Birmingham Museum of Art in Alabama.
My piece, "This Above All" has been juried into the exhibition. In addition I will obtain CPSA signature status as a result of being juried into three international exhibitions within ten years, and fellow artist and close friend Deborah Friedman (MA) will be receiving her signature status as well. So despite my issues with flying (and this is the last time..............ever...................really), I will be traveling to Atlanta for CPSA Convention Week.
My congratulations to the other artists accepted into the exhibition. For further details about The Colored Pencil Society of America and the international exhibition visit http://www.cpsa.org/ .
Posted by Lynda Schumacher at 7:07 AM 5 comments: 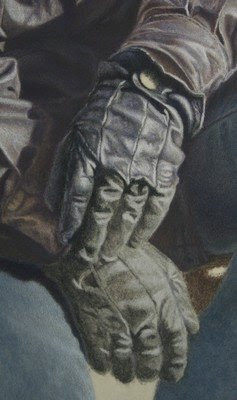 My current work-in-progress is an approximately 22 x 15 colored pencil drawing of a cowgirl that I began several weeks ago. It is done on sanded pastel paper, as most of my work is: its surface can take almost any abuse I may heap on it...........(and good thing, as this piece has been very challenging at times!)
The photograph is a close-up image of the cowgirl's leather gloves, and shows the process I used in developing them. I started with a grisaille, or an under-drawing done in different shades of gray. The term 'grisaille' itself is derived from the french word 'gris', which means gray. Value drawings of this type are often executed in browns or sepia tones as well.
After laying in the grisaille, I developed the final and more detailed layers. In this case I used black grape, dark brown , indigo, brown ochre, greyed lavender, and several shades of gray. The top glove shows the difference between a portion of the glove that is fully completed, and the grisaille.
Increasingly I find myself choosing to use a grisaille technique in browns or grays; for me, it seems particularly useful when rendering leather or various types of fabrics.
Posted by Lynda Schumacher at 8:58 AM 4 comments:

The Riverside Gallery in Yps 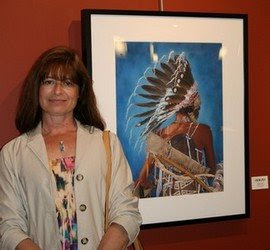 To Blog, or not to Blog

Nearly one year ago I sat in downtown Seattle with artists Deborah Friedman and Dee Overly, and I was adamant: under no circumstances was I going to start a blog. And I had valid reasons for my resistance. For one thing, I didn't have the time (for goodness sake!) For another, what if I began a blog then found I had little of value to say?................Or, horror of horrors, no one reads it.

Over the months, I've come to realize that any reasons I may have generated were merely discomfort over tackling yet another unfamiliar bit of territory. So here I am, starting a blog. I plan to include posts regarding exhibitions, works-in-progress, art-related information and news, and an occasional anecdote.

So welcome, and stop back soon.
Posted by Lynda Schumacher at 11:09 PM 3 comments: