"Canadian Cowgirl" (retrieved from the flat file!), and Exhibition News 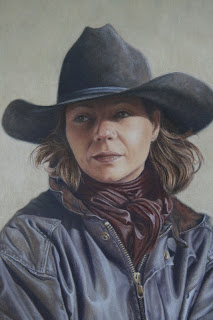 You may recall that my then nearly-completed work "Canadian Cowgirl" (close-up shown) was placed into flat file exile -- an effort on my part to gain some, shall we say, 'artistic perspective'. Since taking her out of hiding several days ago I have completed the background tone and tweaked several areas. As are most artists I know, I tend to very hard on myself and my own work; so after not working on the drawing for about three weeks I fully expected to see glaring mistakes calling for some significant changes.............but I didn't. Instead I was rather surprised to find that 1) I was much more satisfied with the drawing than I initially realized, and 2) regardless of that, I will change, tweak, alter, correct, and nit-pick............and at some point I simply have to make the decision to call it done.
Aside from that, I very recently received notification that I have had work accepted into the 2009 Art Kudos International Exhibition. At least fourteen countries will be represented in this online show, made up of 140 works of art chosen from nearly 1200 entries. Beginning on August 15, 2009, the group of finalists and the award winners can be viewed online at http://www.artkudos.com/ .
Posted by Lynda Schumacher at 10:33 PM