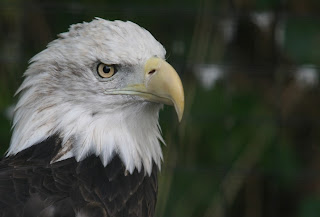 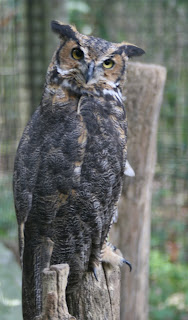 Recently my husband and I visited the Kellogg Bird Sanctuary in Augusta, Michigan, for the purpose of obtaining potential photo references. Originally developed in 1927 as a refuge for migratory birds, the 180 acre sanctuary also became an important part of Michigan's Trumpeter Swan restoration project in the 1980s. It features numerous species of waterfowl in their natural habitat, as well as birds of prey enclosures displaying a number of raptors and owls. I found that we were able to get so close to many of the bird species with our camera equipment, that I have many more resources than I could ever dream of using. Bird photos, anyone?
While en route to the bird sanctuary we accidentally happened upon quite a gem. Much as I hate to admit it, I was more than a little cranky that we had not stopped for breakfast prior to arriving in Augusta which is more than an hour from our home...............because upon first glance it appeared that there was no food to be had in Augusta! Then just slightly off the main street we happened upon 'A Food Affair Cafe', a gourmet restaurant owned by chef Jared Dellario, and his mother Cheryl Dellario. 'A Food Affair Cafe' strives to use products made and grown in Michigan in an effort to help sustain the state's economy, and rightfully prides itself on the fact that all menu items are made from scratch and from the freshest ingredients available. It is truly fine dining, in a comfortable and casual atmosphere adorned with fine art by local artists. Both of us felt that it was one of the best restaurant meals we have had in quite some time.............and enough cannot be said about the level of hospitality we were shown. Because we arrived earlier than most Sunday patrons we had the opportunity to talk with the owners as well as "Rachel" our waitress, and we truly enjoyed meeting and chatting with them. So in sum, stop in to 'A Food Affair Cafe' for a great meal; even if Augusta is a little off of your beaten path, you will find it well-worth the detour.
The past couple of weeks it may seem as if I am doing more running around than I am drawing -- and relatively speaking that may be true when compared to the big push I experienced in July and August just prior to the gallery show. But truly, I am drawing; and in fact am working on the largest piece I've done to date. It is currently experiencing its "ugly-phase" -- or one of the many, considering its size. A work-in-progress photo will be posted soon.
Thanks for reading.
Posted by Lynda Schumacher at 9:53 PM