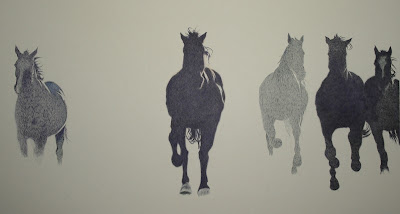 Though in its very early stages and minus a few horses, the above image provides an idea of the general composition of my current drawing.  The image will be a 20" x 30" colored pencil piece, and the reference photographs I am using were taken in Wyoming a number of years ago.  The horses will be backlit by the setting sun, causing the onlooker's viewpoint to be primarily cast in shadow.

More landscape-like in nature, this drawing is a very different approach for me.  Consequently, it has already wreaked havoc with my tendency to overthink everything.  I usually tend to choose subjects which are close-up in perspective, and that provide at least a fair amount of detail and texture.  This zoomed-in view allows me to attempt to tell a story by conveying emotion through the subject.  In contrast, the current piece will contain very little detail, many soft edges, and a lot of sunlit dust and ambiguity!  In response to my bemoaning the challenge of said ambiguity, a friend aptly pointed out, "Its just shapes, Lynda: its just shapes".  True enough.  (And really........ why on earth less detail would cause a minor panic is beyond me anyway.  That just makes no logical sense!)

So as I keep drawing and keep learning, summer is starting to wind down in the rolling fields of this part of southern Michigan.  The cicadas have been buzzing in the trees, the migratory birds are gathering in larger groups, and thankfully........the nights are cooler.  Sometime soon the barn will become suddenly and eerily quiet, absent the constant chatter of barn swallows.  This time of year often brings a sense of melancholy with it for me, as the tick-tock of another summer season passes.........and as some of you know my son leaves for his first year of college in little more than a week.  We have much to accomplish prior to his leaving, so time to draw will be at a premium in the near future............but thats okay.
Posted by Lynda Schumacher at 11:08 PM