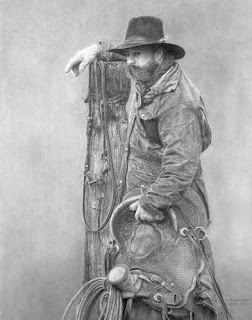 On August 15, the 2009 Art Kudos International Competition and Exhibition opened featuring artists from fifteen countries. I'm pleased that my graphite, "Canadian Cowboy", was accepted as one of the 132 finalists in the exhibition. Fellow Colored Pencil Society of America member Holly Bedrosian was also accepted as a finalist. The finalists and award winners will be posted online for one year, after which the exhibition will be available through the Art Kudos archives.
It seems to have taken me a long time to recover from the CPSA convention week in Atlanta, Georgia, which was followed several days later by a quick trip to my brother's home in Michigan's upper peninsula. Both my 17-year old son and I were challenged by 20 hours of each other's constant company during the drive there and back over four days!
In the mean time, I am excited about and have been preparing for my first gallery exhibit: a three-person show with fellow colored pencil artists Bonnie Auten and Dianna Soisson, both of Michigan. The show will take place at the Hudson Gallery in Sylvania, Ohio from September 1 - 26, 2009, with the opening reception on Saturday, September 12, from 5 - 7 p.m. I, who am not accustomed to working under rather short deadlines, am scrambling to get the last piece finished in time to be photographed and framed for the show. (I've realized it is good for me; I need to put myself in the position of having a deadline more often.) More detailed information regarding this exhibit soon.
Posted by Lynda Schumacher at 9:44 PM