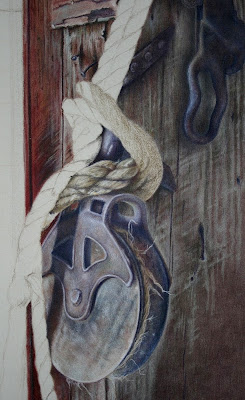 On our small horse farm we are fortunate to have one of those 100+ year-old, three-story wooden barns, and are even more fortunate that it is in exceptional condition. Over the years I have found various 'treasures' in that barn, such as the writing on a wall indicating that it was built in 1884. But more often than I'd care to admit I am guilty of running through my life on auto-pilot. Consequently I sometimes do not really see what is around me. Such was the case with the subject of "Rope and Pulley", the current piece which I am very near to completing.

The old iron and wood pulley hangs on an oak beam near one of the barn doors that I rarely use. Despite this I have walked by it countless times, never really noticing what a fascinating object it is............until one morning in early July it captured my attention. According to my neighbor Wilbur, an eighty-five year old gentleman who owned and operated our farm for several decades, the pulley and its accompanying iron hook were used to lift hay into the hay mow. One end of the rope was attached to horses outside the barn, who would lift the hay via pulley when driven to walk forward.

I look forward to finishing this piece -- hopefully a couple of more days will do it -- and then plan on taking a brief 'break' from drawing during which I'm going to embark on a search for a new laptop computer. Incidentally, when talking with an out-of-state friend today I described our barn as structurally resembling one of the old "Mail Pouch barns" , and was surprised to find that not everyone knows what a "Mail Pouch barn" is!.................(I won't mention any names, but..........the link will further the education of those not familiar with this agricultural icon!)
Posted by Lynda Schumacher at 10:38 PM